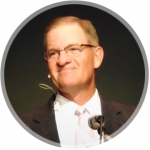 Brother Dave McCracken is the son of J. T. McCracken, an “old fashion hell fire and brimstone, two fisted, gun barrel straight, soul winning, Bible believing Independent Baptist preacher.” Brother Dave was saved at an early age in a revival meeting at the Grace Baptist Church in Bowling Green, KY, under the preaching of Brother Raymond Tracey. A missions trip to Mexico was key to the surrendering of his life to do anything that God would direct. The next year, 1972, at the Mountain View Baptist Youth Camp in southeastern Kentucky, under the preaching of Brother Tommy Trammel, he surrendered to the call of God to preach the wonderful gospel of Jesus Christ.

Brother Dave attended Baptist Bible College of Springfield, MO, and Independent Baptist College of Dallas, TX. He graduated with a Bachelor of Science in Theology in 1978. Before graduation, Brother Dave met Nancy Vance of Garland, TX. Nancy was saved under the ministry of Brother Charles Thomas of Rogers Baptist Church in Garland. They met as students at IBC and were married in 1976. They have two daughters Angie and Becky and both are preparing their lives for the ministry.

After college, the McCrackens moved to Oklahoma City to serve six years at the First Bible Baptist Church. He served as Youth Director, Bus Director, Junior Church Director, Visitation Coordinator and Pastor’s Assistance. In 1984 they moved to Glenpool, OK, where they were involved in founding of the Calvary Baptist Church. In 1989, the McCrackens went into full time evangelism for less than a year when God stopped their bus in Stillwater, OK, at the Bible Baptist Church. Brother Dave pastored for almost nine thrilling years when God’s sovereign control moved them back into the field of evangelism.

Brother Dave has been preaching in every setting of church ministry. Because he has pastored for over fourteen years and worked on church staff for six additional years, he is well aware of church needs.  He also understands the meaning of having a “Pastor’s Heart.”  He is well known for his fun-loving, straightforward, powerful delivery of Bible Truth.

Brother Shrock has been with us since the beginning of our Master’s Men Conference. His dynamic song leading and trumpet playing help set the spirit for great preaching. He will also preach and direct the Men’s and Young Men’s Chorus and Brass Ensemble.

In 1983, Dr. Lonnie Moore started Tabernacle Baptist Church in Nicholasville, KY, which he still pastors. He is the keynote singer at the National Sword of the Lord Conference. He has four daughters. All are married to men in full time ministry. He will be speaking during the Early Bird Session and during the Breakout Sessions.